The Migrational Staging of Purple Martins 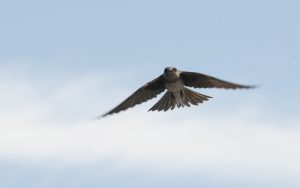 In 2002 Allen Jackson and CU Board member Leslie Ficcaglia spearheaded the creation of a festival to celebrate the annual migration of purple martins and their temporary staging along the Maurice River. With the assistance of Cumberland County and Maurice River Township the Purple Martin Spectacular was launched. The area around the Mauricetown bridge is the location for North America’s largest martin migration staging area; come mid-August on the tidal marshes adjacent to the Maurice River hundreds of thousands of martins congregate each evening at dusk. There they form a murmuration swirling in masses and then zeroing in on the marsh to bed down for the night. There is a sense that a signal to drop in one fell swoop has been given with great authority. Purple martins feed for several weeks on the insect populations along the NJ Delaware Bayshore, building and storing fat that will fuel their trip to their wintering grounds in Brazil. They will leave in large congregations, for migration in numbers has long been a strategy for success in many species. But for a few weeks they are residents of the Maurice River marshes, and a cruise to enjoy the awe-inspiring numbers of aerial acrobats has become an August tradition.

When fall ensues the river will provide support for other species’ migrations: ie. red-winged blackbirds, sora rails, ducks, raptors, and others will visit the Maurice River’s vast wetlands in search of food and shelter.

We are not certain how many more years we can count on witnessing the purple martin phenomenon. And we are not sure how long it was taking place before ornithologist Pete Dunne noticed it in the 1990’s. The birds faithfully used a marsh just north of the Mauricetown Bridge Causeway in Maurice River Township up until 2013. Since then the birds have relocated to other marshes within a mile of that same bridge, and it has become necessary to view them from a boat because of the vastness of the marsh plain.

Since 2002 CU Maurice River has been one of the major organizers of this event, helping to provide viewing opportunities each August when the purple martins stage. In fact our evening cruises sell out each year. We do not know how much longer the martins will choose the Maurice River for their annual gathering site, but we do know that seeing them is a wondrous event and is indeed spectacular.

We suggest that those interested in viewing this phenomenon contact our office as early as mid-July. By August we normally have slots but times and dates become more limited.

May
15
Sat
all-day CU’s Big Day – Dawn Song, Hansey...
CU’s Big Day – Dawn Song, Hansey...
May 15 all-day
Join us for Dawn Song, a morning walk with members of the CU Fish Hawks, our World Series of Birding team, a paddle at Hansey Creek, and for our annual volunteer recognition day of fun in the great out of doors. Register here: https://conta.cc/3aMU8FF
May
18
Tue
5:30 pm ReTurn the Favor Work Party
ReTurn the Favor Work Party
May 18 @ 5:30 pm
Join CU Maurice River staff for a guided walk for the ReTurn the Favor program. Register here: https://conta.cc/3e4hcBC
May
21
Fri
all-day Family Friendly Fridays – Frog Slog
Family Friendly Fridays – Frog Slog
May 21 all-day
A hit with both the young and young-at-heart. The Annual Frog Slog is a night of discovery and experiential learning about local frogs. This is a night excursion in wet areas so please come prepared for conditions. A flashlight or headlamp and knee-high mud boots or waders preferred. All CU Saturdays, CU Socials and Family Friendly Fridays are free for CU Maurice River Members and $25.00 per non-member. Click HERE...
May
22
Sat
9:00 am Volunteer Work Group
Volunteer Work Group
May 22 @ 9:00 am – 1:00 pm
Join us for a Volunteer Work Group at First United Methodist Church for a planting session.
9:30 am 4th Saturday Walk @ Waltman Park
4th Saturday Walk @ Waltman Park
May 22 @ 9:30 am
Meet at the Maurice River Bicycling and Walking Trail in Millville at 9:30 a.m.