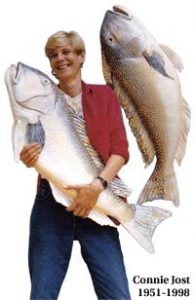 Constance Jost was a well-known South Jersey artist whose works incorporated fish and other marine creatures. A resident of Port Elizabeth, Cumberland County for 15 years prior to her demise on January 9, 1998, Connie was a 1969 graduate of Vineland High School, a 1973 graduate of Montclair State College, and an apprentice with Jersey City artist Patsy Novell. She received her master’s degree in fine arts from Goddard University in Los Angeles.

Connie taught in several schools throughout the New Jersey Bayshore area, and was always enthusiastic, humorous, imaginative, and an inspiration to her students.

Ms. Jost’s career was clearly influenced by her parents; her mother was an artist and her father a carpenter and fisherman. In a typical example of her word play, she commented in a 1992 interview, “I like to say my artistic license and my fishing license are the same.”

Connie was a sculptor and a painter who used molds of fish and other marine life found in southern New Jersey to create latex replicas that she then painted as accurately as possible. These replicas were incorporated into sculptures and relief paintings.

Widely displayed, and appearing in exhibits at the Rosenfeld’s and Muse galleries in Philadelphia, Connie’s works were often described as whimsical and comical. The titles frequently involved puns: Flukes of Nature, Infant Tile, or Migraine Haddock. Many times the message was more political or environmental. Stars in Snipes depicted the American flag as a net of abundance, while at the same time challenging the viewer to question the practice of over-fishing and the resulting depletion of a vital resource.

Ms. Jost’s works on public display include the relief paintings Airloom for an Ocean Floor in the Cape May County Court House and Another Salmon Chanted Evening in the headquarters of the Montana Fish, Wildlife & Parks in Kalispell, Montana.

In a 1988 article about an exhibit at Rosenfeld’s, an Inquirer reviewer called her work an “attempt to examine the undersea world by a process that calls to mind the conflict between natural forces and man’s need to control them.”

In 1993, the State of New Jersey purchased Shellife for display in the Marine Studies Center of Rutgers University in New Brunswick. The 20-by-13-foot fiberglass sculpture addresses the ecological concerns created by the human destruction of the ecosystems along the continental shelf.

Connie’s untimely death was caused by cancer, the environmental illness of our time. Ironically, her life’s work depicted her concern for degraded ocean habitat and her death served as a sentinel of the degraded nature of our own habitat.

Connie was an innovative teacher with boundless energy who donated time to the Bayshore Discovery Project and other endeavors which she viewed as making a contribution to the marine environment. The Schooner Project regularly consulted with Connie for her innovative ideas, and they have provided us with a list of miscellaneous activities that Connie submitted to them. These activities were typical of her ability to go beyond the confines of conventional thought that restrict many people’s creativity. Connie had a talent for tapping into kids’ natural curiosity. The sketchy nature of the list, which is in the form of rough notes, forces the reader to become more imaginative in interpreting what Connie may have intended. Teachers may be able to build a lesson plan around any of these activities. We hope that by implementing these activities Connie’s teaching spirit may live on, just as her artistic spirit survives in her work.