Amazonian Plant Makes its Home on our Waterways

This past year, CU has been leading “Birds and Botany Breakfast Walks” on the Maurice River Walkway. Week after week, we’ve watched different plants come into bloom, and then later go into fruit. One of the plants we’ve watched is Vitis, or grape. We have several native grapes in southern New Jersey, including Vitis labrusca (fox grape). All are edible, but in my personal opinion not all are particularly tasty. A conversation one day about Vitis brought up an interesting fact about our native grapes.

In September, I received a message from the Rutgers University’s Cooperative Extension of Cumberland County that a local citizen from Vineland had reported an unusual plant growing in the Menantico Creek in Vineland. Renée Brecht, Associate Director of Citizens United, and I visited the location and we were able find the plant. Using identification manuals and comparing this plant with specimens in Brooklyn Botanic Garden’s herbarium (a collection of dried plant specimens), I was able to identify the plant.

The plant in question was parrot feather (Myriophyllum aquaticum), a freshwater aquatic plant species native to waterways in South America. The plant gets its common name from its feather-like leaves. Attractive and easy to grow, it is oftentimes used in outdoor ponds and in aquaria and is available for sale by some nurseries.

Being a botanist, finding and identifying a plant that I have never seen before usually makes me happy. Not this time. Parrot feather is regarded by biologists as an invasive species, which means that when it escapes from cultivation it can spread rapidly and cause numerous ecological problems, including the displacement of many native plant species. Unfortunately, this is indeed the effect parrot feather is having in the Menantico Creek. Besides its impact on our native plants, parrot feather can also negatively impact animals that depend on the native plant species for food sources and other things. Large populations can restrict water flow in streams, rivers, and irrigation channels, causing localized flooding, making the area more suitable for mosquito breeding, and interfering with recreational uses, such as swimming, fishing, and boating.

Due to its invasiveness, parrot feather has been banned for sale in several states. It is also causing problems in Europe, Australia, New Zealand, and South Africa. In the eastern U.S., it has primarily been a problem in the South but is now reported in northeastern states, including Connecticut, New Jersey, New York, and Pennsylvania.

Regarding the Menantico Creek population, Citizens United, in coordination with state conservation officials, are beginning an eradication effort. Eradication and control efforts in other regions have been quite costly, sometimes costing hundreds of thousands of dollars. Early detection and response greatly increase the chances of successful eradication and help to keep costs down.

Preventative measure can be taken against further infestations of this Amazonian invader and other aquatic invasives. The best approach is to simply not grow the species; rather, choose species, preferably native ones, that are not invasive and do not pose a threat to the environment. This is especially important for outdoor ponds where birds and other animals can move the plants to local waterways. Never dump plants or water from your aquarium or pond into local waterways where they could escape. Many aquatic plants oftentimes reproduce from plant fragments. Dumping even small pieces of the plant can be enough for it to become established.

Maintaining the water quality of our local streams is also important, since many invasive species do not grow well in high acid, low nutrient aquatic systems indicative of many local waterways, especially those in or near the Pinelands. The appearance of non-natives in our waterways is oftentimes correlated with changes in water quality, oftentimes the result of nutrient runoff due to fertilizers and other human activities.

Invasive species are not limited to aquatic plants, as many of our local habitats, terrestrial and aquatic, now support numerous invasive plants and animals. Biologists are only now beginning to better understand all of the impacts these newcomers are having on our ecosystems. 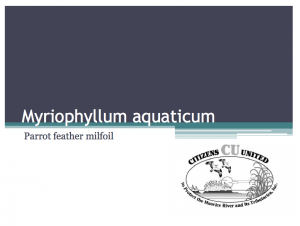