Presentation
of
The Pine Barrens: Up Close and Natural

Russell Juelg, Director of Outreach and staff naturalist for the Pinelands Preservation Alliance, will be present to introduce the film The Pine Barrens: Up Close and Natural. It is the first nature film ever produced about the New Jersey Pine Barrens. The 30 minute documentary provides a breathtaking introduction to the region’s fascinating natural history, plants and wildlife. Following the film Russell will discuss the ecology of the region and efforts to protect its forests, streams and wetlands.

PPA is a non-governmental, charitable organization devoted to preservation of the natural and cultural resources of the Pinelands National Reserve through advocacy and education. 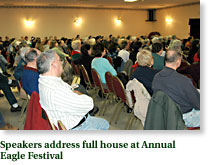 Eagle Festival and Chili Dinner – The presentations at the Eagle Festival were informative and many people listened intently. There were about 100 participants for each presentation. The weather was not completely cooperative that day, but during the drier periods eagles and other raptors made graceful displays.

Everyone was complimentary about the entire event. The CU volunteerism for both venues was fantastic – at least 5 of our members served on the county’s festival committee – in fact, trustee Leslie Ficcaglia chaired the event committee. Ten folks worked the festival table, at least five of our members spotted birds for visitors, ten people led the two-day Raptor Discovery Day interpretation at the Peek Preserve for seven different school groups of approximately 590 students, twenty teachers, and forty-nine chaperones, and two people helped out with the children at the Mauricetown Firehall.

CU’s Chili Dinner topped off the festivities and was a resounding success. About 115 folks attended the dinner and another 20+ folks made contributions toward it! Thirty people helped prepare food. An estimated 186 quarts of chili were prepared. And nearly forty people donated toward the auction. The “Chili Bowl” was awarded to Tony Klock for overall enthusiasm for the event. He sold about 75 tickets and cooked nearly twenty quarts of chili. The actual award was a beautiful large bowl donated to the event by local potter Kate Waltman; thanks, Kate!

Okay, drum roll please – the event grossed over $11,000 dollars and the profit was about $8,500. A special thanks to our new Assistant Director, Renee Scagnelli, for her coordination of the dinner and the Raptor Discovery Days activities at the Peek Preserve.

We ventured onto some shaky ground to call out the folks who went the extra mile; the list is almost endless. We did our best to print the names on the Chili Dinner program. Some omissions to that program were Roy Kaneshiki and Dawn Amari who both helped. A special thanks goes to Tim Russell of the Laurel Lake Property Owner’s Association who not only made provisions for the rental but also helped with all aspects of the evening. Most importantly each person, each donation, and each task was a necessary component in making the Festival and Chili Dinner a success.

Leading up to the festival was the Riverfront Renaissance Center for the Arts’ raptor-themed art exhibit. This included not only professionals but also aspiring young artists and the Eagle Festival school art contest. Nonprofit groups who were involved in the festival had their displays in the atrium, including Citizens United. We thank Michael Cagno and the Center’s volunteers for arranging all the details of this aspect.

Maurice River Bluffs – Blazin’ the Bluffs & Trimmin’ the Trails – On January 21, CU volunteers successfully cleared the paths for recreational enjoyment by TNC preserve visitors. Thirty-five folks showed up to help out, 25 of which were CU volunteers. It was splendid weather and we covered about two miles of trails. Renee reports a good time was had by all, so don’t miss out on the next opportunity for involvement. The papers have been giving good coverage to our press releases and this allows more people to be involved in our volunteer activities.

CU Testifies on Union Lake Development – Over 700 homes have been proposed for a development along the eastern shore of Union Lake in Millville. The developer contends that the development is a clustered village. CU delivered testimony contesting this claim and pointing out that the houses are sprawled over the extent of the site. We also believe that the storm water retention areas should not be calculated into the open space figure; this would oblige the developer to provide approximately an additional 18 acres of protected space. We are suggesting a larger “contiguous set-aside” adjacent to the Union House. We also challenge that if the set-aside is only accessible to half of the proposed development (the age-restricted portion) then there should be two applications, or at very least it should be modified to provide access to both communities. This also raises an important question: should open space be available to the entire community of Millville or be private, and only used by the development in which it is situated? The next Planning Board meeting addressing this application is scheduled for Monday, March 13 at 6:30.

Water Quality Monitoring – CU continues to monitor the water quality in Parvin Branch flowing through Vineland. Water Quality Manager Fred Akers has been collecting surface and ground water samples and delivering them through a chain of custody process to a certified testing laboratory since May of last year. The chemical water quality sampling program is scheduled to be completed this coming April, after which the data will be analyzed and interpreted. The biological sampling for the Parvin Branch Project has already been completed, and those samples are being analyzed now. Fred reports that the aquatic insect counts are very low, which appears to confirm the NJDEP’s historic Aquatic Life Impairment status for Parvin Branch and the adjacent segment of the Maurice River.

Wheaton Village Creates Garden – Staff at Wheaton Village has asked that our volunteers and staff assist in creating a garden on their grounds. Assistant Director Renee who is knowledgeable about native species, Irene Bird who has been instrumental is the creation of public gardens and Lorraine Keifer of Triple Oaks Nursery are key to assisting in this project. If helping with gardening is one of your interests please contact Renee Scagnelli and let her know how you would like to help out! Phone is 692-0460 or e-mail her at RScagnelli@comcast.net

Bevin Skiffs – Once again this school year Principal and CU member Bill Sheridan has his students building boats. This year members Gladis McGraw, Irene Bird, Ed Pio and of course Bill are all involved. If you would like to help out, work parties are on Thursday evenings at RD Wood School. Please call Gladis McGraw at Wood School to volunteer – 856-327-6141.

Bayshore Coalition – Presently, the Bayshore communities have had a build-out study compiled for the townships along the Delaware Bay in Cumberland County. Vineland has also begun a similar effort. The Coalition has a William Penn grant to provide funds for an additional study. Representatives of the Coalition, the Association of NJ Environmental Commissions, Citizens United and Millville Planner Kim Warker met with Noelle Reeve of the Regional Planning Partnership to commence such a study for Millville. Essentially, the project takes digitalized data and layers information with a Geographic Information System to illustrate existing zoning, and then it applies a model forecasting a number of outcomes regarding population, traffic, water and other municipal resources. Lands that cannot be built upon are identified; these “constrained” lands include protected space, wetlands, and possibly despoiled areas. After many parameters are applied, planners have another tool to predict development outcomes so that they can amend or maintain existing zoning criteria.

New Members – January was a month in which we had numerous people join our ranks and we look forward to their involvement in our activities. Welcome aboard!

Maritime Study – The University of Delaware has turned in what is hopefully a final draft of the Maritime study they were conducting for us.

Getting up to speed – Office equipment was purchased in order to facilitate the addition of Renee Scagnelli as Assistant Director. Armed with her new laptop and an auction program she is fundraiser-ready. Rock on, Renee! In the future we may post a wishlist of “office needs” so keep us mind.