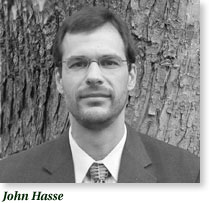 Professor John Hasse, Ph.D. is a faculty member at Rowan’s Department of Geography and Anthropology where he teaches Geographic Information System, Advanced GIS, Metropolitan Regional Planning and Intro to Mapping Science courses. Dr. Hasse  recently conducted a geographic analysis of the proposed 700+ housing development at Union Lake before the Millville Planning Board.  Using this site as an illustrative case study he will introduce the audience to a geospatial inquiry of the property as it relates to a development proposal.  Dr. Hasse uses high tech tools to display geographic concepts: mulit-layed digital maps, satellite imagery, digital video and up-to-date internet databases and web information.  Utilizing GIS tools is one method of measuring sprawl.  New Jersey is losing 7,500 acres of forest to development every year – 21 acres per day.  This has a great deal of impact on impervious surface coverage and directly affects our water supply and water quality.

Dr. Hasse holds a masters degree in urban planning from the Edward J Bloustein school of Planning and Public Policy and a 2nd masters and Ph.D. in geography from Rutgers University. His research expertise involves using geospatial technologies to measure sprawl and the environmental and social impact associated with urbanization. Hasse has also worked closely with the NJ Department of Environmental Protection on land use mapping and smart-growth-related policy development. 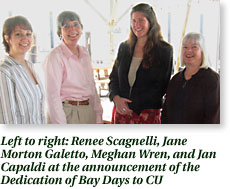 Bayshore Discovery Project dedicates Bay Days to CU
Each year the Bayshore Discovery Project dedicates Bay Days to an individual or organization. Citizens United to Protect the Maurice River and Its Tributaries, Inc. has been selected as the 2006 honoree.  Meghan Wren, Executive Director of BDP, said, “Citizens United has been a steadfast contributor to the quality of life in the Bayshore region for a quarter of a century.  We are thrilled to dedicate Bay Days to CU.  I’ve always been impressed by their sheer quality of achievements.  Led by the tireless example of their president, Jane Galetto, the volume of scientific data collected, educational tools developed, cultural assets produced and community projects undertaken is truly amazing.”  Upon hearing that CU was selected to receive this honor Paul Kenney of the National Park Service said, “No organization I know of does a better job of promoting a sense of place than CU.”  Jane Galetto responded to the news by saying, “We’re pleased to receive this honor. We’ve always believed celebration is an important component of preservation and Bay Days is a great way to celebrate our area’s unique culture and beauty.” 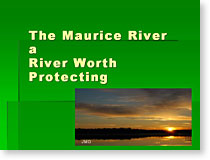 Presentations
During the month of April CU presentations were in demand.  The County Garden and Countryside Garden Clubs each enjoyed the Power Point show The Maurice River: a River Worth Protecting.  The Bayshore Discovery Project hosted the osprey slideshow Eggs to Flight.  The Vineland Nature Club was treated to a presentation entitled Rarities of the Pines, highlighting the flora of the Pinelands.

On the Advocacy Front
Renee Scagnelli and Jane Morton Galetto met with the Mayor of Newfield to discuss concerns regarding the threat to residents from a superfund site in Newfield. Mayor Rick Westergaard is extremely worried about Shieldalloy Metallurgical Corporation’s plan to level a radioactive slag pile to a 27 foot high 68 acre sealed area which encompasses approximately 10 percent of the Newfield’s municipality.

Citizen United offered testimony on two development proposals in Millville: a 700+ unit housing development adjacent to Union Lake and the Hanson Aggregate’s proposal to mine 300 acres of a 600-acre site between Silver Run and Dividing Creek Roads.

CU has spoken out at public hearings in opposition to the proposal to put treated VX nerve agent in the waters of the Delaware River.  Many members of the environmental community have also protested this scheme.

Litigation Update
The judge upheld the Millville Planning Board’s approval of the Holly Farm development proposal which was challenged by CU, New Jersey Conservation Foundation, Association of New Jersey Environmental Commissions, and NJ Audubon. The parties are presently considering whether to appeal this decision at the next level.

Upcoming Meeting of Interest
On May 8th it is anticipated that the Millville Planning Board will be deciding on both the Union Lake and Hansen proposals.  We believe attendance will show a level of public interest in these projects. 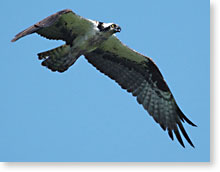 Trail Trimming
Approximately twenty-five Millville High School students, under the direction of Millville teachers Donna Cedermark and Larry Young, joined CU’s Renee Scagnelli and Nature Conservancy staff in painting trail markers on two trails at the Maurice River Bluffs Preserve. The wonders of nature provided great lunchtime viewing as eagles and osprey put on a majestic display of flight. A good time was had by all.

Opening Ceremony
The Nature Conservancy will have a grand opening ceremony for the Bluffs Preserve on June 10, 2006.

Children’s Garden – Wheaton Village
CU Members Jane G., Renee S., Renee Pagliughi, Lorraine Keefer and Irene Bird attended an organizational meeting at Wheaton Village to discuss the possibility of establishing a children’s garden on the grounds of Wheaton Village.  Both Renees think this could be a volunteer opportunity for CU members.

Bi-Annual Donation Drive
If you gave in the first six months of 2005 you will have received or will be receiving your  annual appeal letter.  We send each membership one letter but we split the appeal into two batches: 1. Folks who gave months January-June  2. July-December, of the previous year.