Before we endeavor to give you the Citizens United year in review permit us to relay that we will open 2004 with a little preview of the upcoming Raptor Festival. Brush up on your raptor identification skills and interesting raptor facts.

Our first guest speaker of the year will be Clay Sutton, a well-known writer and naturalist. For eighteen years he has conducted CU’s Winter Raptor and Waterfowl Survey, a long-term research project which has now become a year-round waterbird survey. Clay is a nationally-known raptor expert, and at our January 14 meeting he will offer a preview of his upcoming slide program for the Cumberland County Winter Raptor Festival. In “All About Eagles” Clay will discuss raptor ecology, behavior, and habitat, and offer many fascinating facts on hawks and eagles. He will talk about the complexities of eagle identification and particularly focus on Cumberland County’s eagle populations — past and present. Join us, and Clay Sutton, for this exciting program.

Annual Message
Well, this has proved to be quite an interesting year. We have needed to assert our stewardship mission on a number of occasions. If you have been reading our newletters you are well aware that we have been entangled in opposing a number of development matters. Our efforts have already had positive impacts. Some final outcomes are still on hold.

The Maurice River Bluffs property is contracted for preservation. Expect more information on that item in January or February. The ultimate preservation of this property will represent many hours of tours, phone calls, negotiations, bargaining, studies and the like. The natural resource values of this property are fantastic. The coastal bluffs provide the full array of eagle habitat: resting, feeding, and breeding. The area represents an eagle’s eye view of the Peek Preserve and southern reaches of the River.

On the protecting Wild and Scenic vistas front, our attorney Todd Heck fought a long and difficult cell tower battle in Maurice River Township. What started out as a nearly 200’ latticework tower proposal was reduced after local Land Use Board hearings to a 135’ lattice structure extendable to 155’. As we go to press we have tentatively reached an out-of-court settlement with the cell provider. Details to follow. Presently, we have a separate formal challenge to Maurice River Township’s adoption of an amended zoning ordinance permitting a wireless communications tower as a second “principal” use on a single building lot already occupied by another principal use. Prior to this new ordinance a cell tower would seemingly have had to be an accessory (i.e., reasonably tied-in) to the primary use, or else require a use variance. We contend that this new ordinance is precedential and a poor precedent at that. Allowing two “principal” uses on single lots opens a can of worms that may be difficult to shut. For example, does anyone remember when CU opposed a bargeport being sited in a conservation zone? That type of incompatability illustrates the undesirable, overly-dense land use that this type of ordinance now seemingly would encourage.

For 17 years we have been advocates of protecting the Conectiv/Holly Farm property in eastern Millville. This 1350-acre parcel is a jewel nestled between the Wild and Scenic Manumuskin and Menantico Rivers. In keeping with our position Citizens United, the Association of New Jersey Environmental Commissions, New Jersey Conservation Foundation and New Jersey Audubon Society, jointly represented by the Rutgers Environmental Law Clinic, have filed an action challenging Millville Planning Board’s recent approval of the general development plan proposed for the Holly Farm property. On this highly environmentally sensitive 1350-acre tract which we have invested so much time and effort to protect, the developer proposes to build 900 homes on 200 acres, a 200-acre golf course, and a 900 acre set-aside labeled a “preserve” – although what it will preserve once it destroys important habitat is anyone’s guess.

It is our contention that our intervention has already paid off in the developer being made aware of the unique attributes of the location. Unlike many development proposals, they have gone to great lengths to amend their plans to attempt to mitigate the impact to species and habitat. Unfortunately, it is impossible to develop the site without grave impacts to species. This is why it has been our contention for many years that the property needs to be protected in its entirety. We await results on several fronts in this proposal.

Earlier last year we found ourselves contesting the City of Millville’s desire to expand their airport industrial park by 4200 acres. Creating a Redevelopment Area was the selected vehicle for expansion. This included declaring areas zoned conservation and agricultural as “blighted” and in need of “redevelopment.” This rationale was just simply too far out of sync with our mission. Eventually, after we intervened, the City committed to protect 300 acres of bluff and removed the famed “600-700 acre Triangle” from the proposed Redevelopment Area. Essentially, the reduction was to approximately 3,600 acres. The City then proceeded to purchase 833 acres for development. The ramifications of a RA for this 3,600 acre area are very far reaching with significant powers in terms of implementation. We were not against expanding the airport development area. Our concerns were the magnitude of the expansion, the broad powers that an overlay zone of this nature carries, and the characterization of conservation and agricultural zones as “blighted and in need of redevelopment.”

Through the great efforts of trustee Leslie Ficcaglia and Clay Sutton we were able to dress up the County’s “Birding Cumberland- A Birder’s Guide to Cumberland County, NJ.” Special thanks to Cumberland County Department of Planning and Development and Geraldine Dodge Foundation for providing operating expenses enabling us to free up membership donations for this project.

We reported to you earlier in the year that four of our members went to Washington in March advocating that National Park Service Wild and Scenic Partnership Grant dollars be budgeted. There were a number of other Wild and Scenic Partnership River representatives there as well. And guess what – we did it! The partnership funding was increased by approximately 50%. Wow! Many of the wonderful activities that we’re involved in are made possible through this funding program. Permit us to offer a special thanks to our friends in the Philadelphia NPS office for all their technical support and for the encouragement they lend to our efforts. 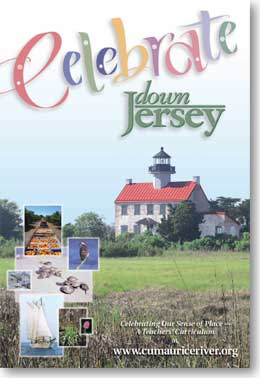 The teachers’ workshops continue to be a hit and now we have a super poster to market the lesson plans on the web. The generosity of the Cumberland County Improvement Authority is enabling us to reprint copies of our teacher’s curriculum. Additionally we distributed aerial photos to schools and businesses as a continuance of our “Down Jersey Sense of Place” program. This was done in partnership with the National Park Service and the Natural Lands Trust. Too cool.

Fred Akers and Tim Jacobsen are getting the Parvin/ Tarkiln Branches stream assessment program underway. This has not been an easy project to wrestle with but most certainly they will come through with a proposed management strategy.

This year’s top honor went to Trustee Leslie Ficcaglia at the EPA’s Region 2 Environmental Quality Awards for her many years of dedication to the environment. She was nominated by CU and the support came from many corners: Pinelands Commissioners, Planning and Development staff, conservation organizations and friends. Way to go. Leslie!

We have some new leaders added to our Officer and Trustee roster. Barbara Strauss, in anticipation of moving south, passed on her Assistant Treasurer position to Irene Bird. Irene has now been voted officially into the role and has been doing a great job! Many of you may be familiar with Irene as the teacher that brought a wildlife habitat to Wood School, an inner city institution that is a centerpiece for turning a neighborhood around – the ultimate Pride of Place accomplishment. Gladis McGraw, also a Wood School staffer, has been taking some evening classes and asked that we look for someone to assume her Recording Secretary position and what a catch! We landed the famed Sue Fenili, teacher extraordinaire. Sue’s environmental accomplishments on the Maurice River run nearly as far and deep as the river itself. One of her classes was the first to draw attention to an ailing Landis Sewage Facility many years ago, and may be very well responsible for starting it on the path of being the premier treatment facility that it is today.

As if all these weren’t finds enough, Steve Eisenhauer stepped up to the bat to round out our Board of Trustees with his background in land protection. Steve has a wide range of stewardship and administrative talents, having worked for The Nature Conservancy and now the Natural Lands Trust. He brings our school curriculum to local schools in combination with the NLT’s schoolyard program. Additionally he has offered to coordinate some fieldtrips for our members. Wow!

You will notice another new name on our roles: Gerry Barsotti braves the Treasuer’s post held by Steve Testa for 17 years. Steve’s steadfast support of CU has been one of our best assets, if you’ll excuse the pun. He has been there through thick and thin assisting us and trusting us to make wise decisions. His and our work load caused us to add the assistant position a number of years ago. He will still be using his CPA talents as our accountant and it will take a lot of coordination to make the transition between him and our newly elected Gerry Barsotti. Gerry has a host of interesting life experiences to help us out. She was a contract specialist for the FAA, worked at an engineering firm that specialized in DOT work, presently teaches math, manages a number of rental properties, was an active scout leader and is very involved in philanthropic activities.

I think you will agree that we have a very special group of officers and trustees! We look forward to accomplishing great things together.

President’s finale:
Long ago I read about a conservationist who said that boards and politicians often accuse conservationists of being obstructive and “against everything.” He asserted that in fact they miss the point; what’s important is what we are “for.” We seek to pass along a future that includes open spaces, common and unusual plants and animals, clean air and water, places for solace, skies where you can still see stars, woods where you can still hear birds sing, resources that maintain an economy, roads without grid lock – indeed, we are “for” many things. This is not about owls vs. jobs but owls AND jobs. We stand Citizens United in a common effort for a bright tomorrow. Have a wonderful holiday and a better New Year.