Annual Meeting of the Membership

Seasons of the Maurice
By
Jane Morton Galetto, Board President
Citizens United to Protect the Maurice River and Its Tributaries

This presentation covers some of the highlights of the Seasons of Natural History
occurrences on the Maurice River and its Tributaries. For people who like wildlife
it is a visual calendar with interesting natural history facts.
Featured presentation to begin around 7 PM.

The Presentation By Jeff Alpert, Division of Land Use Management
NJ DEP
Riverside Management Practices
Is POSTPONED until January 11, 2012

The Annual Meeting of the membership will be held at 6:30 P.M. on November 9th, at the George Luciano Center, on the campus of Cumberland County College.

This Annual Meeting will afford Delegate Members the opportunity to fill vacancies arising on the Board of Trustees. If you have received a proxy along with this Newsletter, you are a Delegate Member and are entitled to vote, in person or by proxy. If you have not received a proxy and would like to vote at subsequent meetings, you can make that request of the Board in person, at the Annual Meeting, or in writing.

Generally, members of the Board of Trustees are elected for three-year-terms. Trustees whose terms end in 2012 and 2013 will be continuing their service to the organization. Three (3) of the incumbent Trustees whose terms are expiring in 2011 have expressed the desire and willingness to serve for another term (ending in 2014). They are: Karen Johnson, Richard Jones and Berwyn Kirby. Two additional individuals have been nominated by the Board for the three-year term ending in 2014: Mary Fusco and Laurie Pettigrew.

Mary Fusco works at South Jersey Hospital Systems as a dialysis nurse.  She has an intense interest in the outdoors.  She has led nature walks for CU, attended our events, and helped with the preparations for the Western Hemisphere Reserve Network 25th Anniversary Celebration. She has a degree in vocal music education form Glassboro. She was an opera singer and served on the board of Greater South Jersey Chorus.

Laurie Pettigrew is a long-time CU member. She has been a state wildlife biologist for 26 years with the NJ Division of Fish and Wildlife. She is author of NJ’s Wildlife Viewing Guides and as such is intimately familiar with the wildlife of our state and with helping people to appreciate it. In recent years, Laurie managed the creation of grassland habitats on Wildlife Management Areas. Hundreds of acres in Southern NJ offer habitat to early-successional species, many of which are in serious decline. Laurie helps the public interpret a variety of habitats and their benefits. Further she recruits volunteers who do surveys to monitor the success of these newly-created habitats. She has coordinated Wildlife Conservation Corps members in a wide variety of wildlife habitat projects on Wildlife Management Areas. Laurie holds a master’s degree in Wildlife Recreation and Nature Tourism from the University of Wisconsin.

If the nominees are elected, the roster of Trustees during the coming year would be:

After the Annual Meeting, the Trustees will appoint Officers to serve for the coming year. The Board currently intends to appoint the following individuals to serve in the respective capacities of Officers of Citizens United:

Our September 14th membership meeting featured a fascinating presentation by Rick Dutko of the NJ Department of Environmental Protection on the Bats of New Jersey. Having devoted himself to bats for the past 20 years, Rick told numerous stories about bats, and especially his experiences helping remove bats from peoples’ homes, many of which were quite comical. He also shared some amazing photographs from bat colonies, including close-up shots of tiny baby bats clinging to their mothers. It was a memorable presentation. 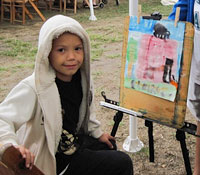 The following Saturday, Lillian Armstrong and Meredith Koenig hosted CU’s Paint a Landscape project at the East Point Artists’ Day. And guess what? When the windows of the Lighthouse were opened that morning, there was a bat hanging from one of the shutters! The bat was visible throughout the day and was enjoyed by many visitors through binoculars shared by Lillian. Unfortunately, heavy rain in the afternoon cut the day a bit short. Even so, several budding artists took advantage of our paper and paints. A terrific video of the event was created by John Thornton and can be found on YouTube by searching for East Point Artists’ Day – you can even see the bat. Special thanks to Dave and Sue Fenili for helping with set-up. 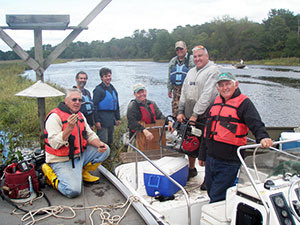 On September 18th, a CU Osprey Work Party was held. Two nests were moved to what we hope will be more suitable locations and a new nest was erected on the Menantico Creek. Those who participated were John King, Tom Talalaj, Dick Goldstein, Ed Pio, Tony Klock, and Peter and Jane Galetto.

Monarch Mania! with Sue Fenili and Karen Johnson took place on Saturday, September 24th in Cape May. Although the Monarchs were a bit scarce in the area, Sue brought her display of the Monarchs she had raised herself. The talk and walk were very well-attended, and an especially bright and enthusiastic young girl nearly stole the show with her knowledge of all things Monarch! After the walk led by Karen, a friend of Dave and Sue Fenili’s arrived with some 150 Monarchs in tow, all of which he had cultivated in his yard in northern New Jersey. It was truly amazing to see so many of these beautiful butterflies at once. We later learned that each and every one was tagged and released for their journey to points south. It was a great day. 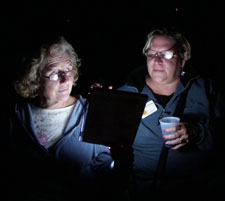 October 8th was a grand slam in the FUN DEPARTMENT. Our Costa Rica travelers started off the afternoon discussing last minute details of their excursion. We can’t wait to hear about their adventures. Then around twenty folks paddled or took boat tours on the river. As the sun set we sang in the glow of the campfire and when the sky darkened we did some star gazing. Nearly 50 people participated. Our singers had a little trouble focusing on the stars and took their talents to the dockside star watch. One might say the stars were lined up, the moon a bit too full, and all of us had a super time. Special thanks to our musicians that night, who led us in song.

Attendance at the Fall Breakfast Walks was a bit light but enthusiasm was high. In Jane’s and Lillian’s absence Mary Fusco and Kathleen Vincents stepped up to plate and led a walk. All had a super time in the great out-of-doors. Many of you have asked about when the washout on the path will be complete. Millville Engineer and CU Trustee Richard Jones reports requests for bids were expected to be returned by Oct. 11 and an emergency repair should be completed about two weeks after that. 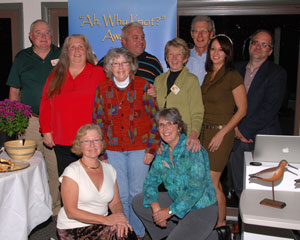 This year we had two Ah Why Knot winners, Meredith Koenig and Linda Costello. And our outgoing Associate Director Renee Brecht received the Presidential Award. Meredith was recognized for her many hours of representing the organization, donations to auctions, membership recruitment and overall enthusiasm. Linda Costello from the Maurice River Township Municipal Office was tapped for her long-time devotion to the Purple Martin Festival and recognized for her many other services to the community. She enabled CU to coordinate many aspects of the purple martin festival last August and is a long devotee to education in the Township and 4 H. Renee was celebrated for the years of service to CU during which she grew the capacity of the organization. Her dedication to CU resulted in greater accomplishments in botanical protection and awareness, her technological skills improved our website, and funraisers, hikes, kayak trips and campfires were all made possible by having her on staff. She keenly executed her duties. Renee’s interests in all things natural and cultural will be missed.

A Trustee Workshop was held October 22 with a focus on the benefits and importance of membership. As always we are looking for ways to serve you better.

Lillian attended a Marketing Workshop sponsored by the Cape May County Department of Tourism on October 18th and 19th. Roger A. Brooks, a renowned tourism consultant, offered a wide-ranging presentation based on his work with hundreds of communities interested in bringing in more tourism dollars. From the “20 Ingredients of an Outstanding Downtown” to “The 7 Immutable Rules of Marketing,” Mr. Brooks offered some terrific insights into today’s competitive tourism destination playing field.

Jane Morton Galetto reports that she and Salem Nature Club had a delightful evening of discussion about ospreys. In fact she reports having been in rare form (meaning her usual antics). Anyway, folks learned a lot about ospreys and their maturation (if not Jane’s maturity?).

Over the past few months our staff has participated in a number of Bayshore Heritage Byway “windshield surveys” in which we evaluated the scenic attributes of individual segments of the proposed byway. This is one aspect of developing a Corridor Management Plan for the route, which is a project of NJ Department of Transportation and the South Jersey Bayshore Coalition. Jane and Lillian also attended the September SJBC meeting, which featured a detailed presentation on Coastal Management Planning.

Many of our members have been meeting with the County Planning and Tourism office in preparation for the Eagle Festival. The fate of the Raptor Discovery Days is still in limbo due to funding constraints.

Unfortunately, after gallant efforts by Mike Loyle, Mary Ann Russell and Susan Leopold, we decided to cancel our wine-tasting event scheduled for November 30, 2011. Apparently, new regulations introduced this past summer make such an event rather complicated, and as a result, not nearly as profitable a fundraising concept as we had hoped. We are considering other fun fundraising options for 2012.

Member Opportunities
Chili Bowl – Get your tickets early! This year’s Chili Bowl will be held Saturday February 11, 2012 at the Mauricetown Fire Hall. Tickets are $25. We will need auction items and cooks.

Website Volunteer Needed – Hm… have you noticed our website isn’t really up to date? We could certainly use some help on that front. If anyone knows someone familiar with Dreamweaver or other web-based website software who might be willing to donate a couple of hours a week to make changes, please contact Lillian immediately! Lillian.armstrong@cumauriceriver.org, 856-305-3238.

Thanksgiving is right around the corner, so best to all this holiday season!

CU on the Maurice River!