Citizens United to Protect the Maurice River and Its Tributaries, Inc.

This year marked Citizens United to Protect the Maurice River and Its Tributaries, Inc.’s (Citizens United/ CU) 31st Anniversary.Five individuals were honored for their outstanding service and were presented the Ah, Why Knot; Awards. We also recognized one outgoing Trustee for his dedication to the organization.

Ah Why Knot Awards
John H. Andrus– Was awarded an Ah Why Knot for his coverage of community news in the Cumberland County Reminder for the past 13 years. Many people in our region depend on the Reminder for local news and John packed its pages with a wide variety of coverage. 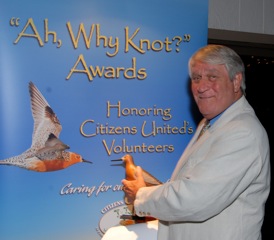 Growing up John spent his summers in Cape May.John retired in September as editor of the Reminder and welcomes his only deadlines are self-imposed. As a graduate of Ohio State University School of Journalism he started his career with the Atlantic City Press in 1964 as a reporter in the Cape May bureau.

Then he moved to the weekly scene with the Wildwood Leader. In that same year 1966 he was named Editor of the Cape May Star and Wave. Later he became editor of: The Cape May County Herald, the Ocean City Sentinel-Ledger and by 1997 he was with the Reminder.

At the Reminder John ran many environmental / conservation stories including such organization’s work and commentaries as: The NJ Conservation Foundation’s bylines, Bayshore Discovery Project, American Littorial Society, NJ Fish and Game, The Natural Lands Trust, Citizens United to Protect the Maurice River and Its Tributaries, Inc. and the like. He covered South Jersey Bayshore news of communities large and small. Everything from muskrat dinners to pancake breakfasts. The Reminder covered ordinary and the controversial. We are grateful for John’s contributions to the community and to our organization. Thanks John. 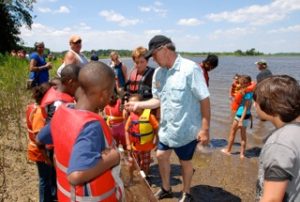 Tim Russell-Member Tim Russell is there to lend his talents to all tasks. He has participated in our youth enrichment day for a number of years with the Elevate Program. Helping kids to seine for creatures in the water and identify them. He has taught kids to kayak keeping them upright and 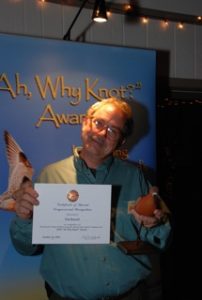 in motion. Tim is our main fire tender at our campfires where he helps to belt out many a tune. His carpentry skills have come in handy when making osprey nests. He and his wife Mary Ann have been hosts to a number of new member orientations, where they have served some great food and camaraderie. They have also helped to host the shorebird scientists by cooking and delivering meals to Reed Beach. Tim is a life long river rat and hails from Laurel Lake. 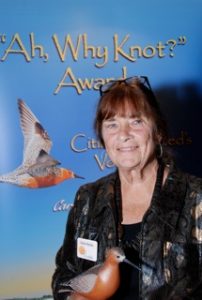 Grace Richter– Another longtime Laurel Laker, Grace’s accomplishments for Citizens United are not as obvious to all. She is a stealth performer. Citizens United President said at the Ah Why Knot, “never did a person’s name GRACE suit them better. For Grace moves subtly and quietly along making a difference.” If you observe Grace at a CU function you will begin to notice all that she does. Her most common donation is that of her artistic talents. At the Chili Dinner she arranges cheese platters, puts out auction items and matches them with bid sheets. She lays out nametags in alphabetical order. She woman’s the CU table during the Eagle Festival. She donates her paintings and silk creations to our auctions. She leads CU Paint a Landscape at both the East Point Lighthouse and Bay Days. Her manner takes people gently though the task of taking the time to appreciate what is around them. She does all this quietly, gently and with inspiration. Not many notice her contributions because of her steady paced peaceful nature… but we do and are thrilled to have her constant contributions. 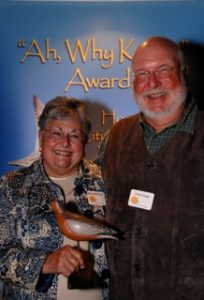 Chuck and Mary Jane Slugg– The dynamic duo. Never has birding had two more enthusiastic leaders. They bring new meaning to the word informative and prepared. Both coming from teaching backgrounds, they know how to capture the imagination of all ages. Chuck and Mary Jane duel volunteers representing both CU and NJ Audubon. They interpret at the Eagle Festival, and the three days leading up to the festival Raptor Discovery Days. These days can be cold and uncomfortable. Where our visitors might only spend a few hours in the elements our volunteers are often out all day. They allow over 700 school children and their chaperones to see birds through fine optics. For many this 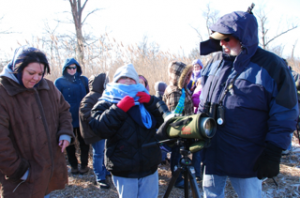 will have been their first experience with nature and for even more the first time they have used a scope or binoculars. Chuck and Mary Jane also help with the Purple Martin Festival pointing out and explaining the migration phenomena of a roosting and staging site. It is not uncommon for them to show up with printed materials to help people to better understand what they are viewing. We are forever grateful for their vast knowledge and willingness to share it in a enthusiastic and modest fashion. 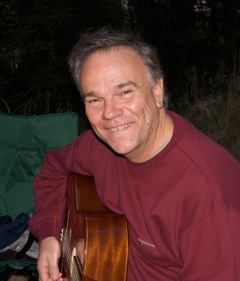 Tom McKee-Outgoing trustee Tom McKee was honored for his service on the Board. Tom is a resident of Mauricetown. He is a 25 year veteran of the NJ Department of Environmental Protection, working in the areas of hazardous of waste cleanup, watershed management, and geographical information systems. A graduate of Rutger’s Cook College with a degree in Environmental Science, Tom currently works in environmental consulting assisting clients in matters related to hazardous waste cleanup, wetlands permitting and GIS mapping, and has lent his expertise to CU on numerous occasions. As an amateur birder and a folk musician, Tom has found many friends who share his enthusiasm for nature and music among the members of Citizens United.

US Presidential Volunteer Awards
US Presidential Volunteer Awards were bestowed upon a number of people who have clocked countless volunteer hours for the benefit of our local natural resources.  In fact, 14 individuals devoted more than 50 hours each and 11 of those dedicated over 100 hours. Over 5000 hours have been tracked this year alone. The projects that had astounding numbers of hours devoted were hosting the scientists, Raptor Discovery Days, the Eagle Festival, the Osprey Colony Project, Adopt Swamp Pink Monitoring Program, Campfire Recollections, and botany surveys/study. Individuals who had this astounding devotions of time are: Irene Bird, Leslie Ficcaglia, Karen Johnson, Tony Klock, Tom McKee, Diane Amico, Allan Jackson, Mary Ann Russell, Gerry Moore, Sue Leopold, Renee Brecht, Jane Galetto, Dave and Sue Fenili. Award speech given by Associate Director Renee Brecht is available here.