Winter is the most exciting time for owls so join us for a timely talk by Pat Sutton who has studied owls in the wild for 30 years. She lives near Cape May, a world-renowned migratory crossroads that is famous for its hawk and owl migration. In her slide program, “HOW TO SPOT AN OWL,” she will relate her fascination with owls and convey the excitement of searching for, studying, and enjoying these elusive and mysterious creatures. Pat will relay owling techniques with an emphasis on ethical owl etiquette. She has even suggested bringing your binoculars along for some hidden slide-show owls.

For 21 years Pat Sutton was the Program Director at the New Jersey Audubon Societyís Cape May Bird Observatory. Prior to that, she was the Park Naturalist at Cape May Point State Park. Pat is a founding board member of the North American Butterfly Association. Today, Pat and her husband Clay are free-lance writers, naturalists, lecturers, and tour leaders. Together they have co-authored How to Spot an Owl, How to Spot Hawks and Eagles, and How to Spot Butterflies. Their latest book, Birds and Birding at Cape May, shows their rich knowledge of our regionís winged denizens. Articles and photography by Pat & Clay have appeared in New Jersey Audubon, Peregrine Observer, New Jersey Outdoors, Sanctuary, American Butterflies, Wild Bird, Bird Watcher’s Digest, Birder’s World, Birding, Living Bird, Defenders, and others.

We are committed to continuing the camaraderie that is so intrinsically linked to the volunteerism that carries out our mission. We have continued with our past commitments such as building boats with inner city youth, banding osprey, organizing festivals, updating the website, preparing and delivering presentations, advocating for preservation, conducting ornithological surveys and so much more.  In 2009 we enter our 30th year as an organization.

Rather than provide a detailed recap of the past twelve months, I thought I would start where I normally end the annual message – by acknowledging a life, and by relaying a love story.  Sometimes the simplest of things escapes us.  Many of you may remember Tom Brown – a local woodman of legend. Tom was one of CU’s trustees and he passed away in 1998.

But many of you haven’t known Muriel, his wife of 66 years.  Tom and Muriel lived off the land for most of their adult life.  In the winters, Tom would trap and hunt and in the spring, he would plant a harvest that would hold them throughout the year.  When he married the 17-year-old Muriel, she had lived most of her life in Camden – a “City Girl.”  She learned to put up the vegetables from the garden to last an entire year,  and to cook the harvest of animals that Tom caught.  Nothing went to waste. 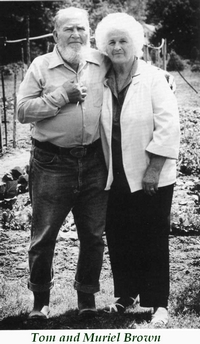 When their children became college-aged Tom was middle-aged and he succumbed to the pressures of providing financial security and joined the Wheaton Glass Co. work force.  While Tom and Muriel fulfilled the commitment of higher education for their children, Tom continued his communion with the great out-of-doors.  He shared his love of nature with all those around him, and built tiny museums in his backyard that collectively easily dwarfed his tiny house.  Local school children made regular visits to their home to understand his and Muriel’s world.  Tom would hold forth in metered prose about his love of nature and Muriel.

He would chide her continually at their wonderful outdoor “cooking events.” In a voice that told him to stop teasing and yet simultaneously egged him on, she would simply say, “Oh, Tom, stop.”  For every amount that Tom was outgoing, Muriel was more quiet, but every bit as good of a host.  Her cooking skills were the rave of all who had tried her kitchen fare, be it fried snapper or apple pie.  What she prepared in a kitchen in no bigger than a minute defies description.

In July, while I was on vacation, Muriel quietly breathed her final breath.  Occasionally, you send a Christmas card to an old friend unaware of the fact that they have gone, and sometimes you get a loving response, as I did from Muriel’s granddaughter Diane Baldwin.  And it made me reflect on something important, important to Tom and Muriel– “The Woods” that surrounded their tiny home.  How dearly Tom loved that woods and how much it provided for them.  That “woods” is what CU refers to as the Holly Farm.  Tom sought to see the woods preserved for all those school children who visited it so often – not for him, but for future generations.  He recited many a poem at public forums advocating that the woods be saved. And somehow Muriel’s passing strengthens my resolve and I hope it strengthens our collective resolve to see that 1400 acre woods protected.

Tom was a man of little formal education but he had a way with words and a rhyme– so much so that his poems are part of the Library of Congress’s Folklife Collection.  Now it seems appropriate to share a poem that Tom wrote for Muriel about the woods.

My Love
By Tom Brown

My wife has often said to me
How lonesome the woods must be.
I answered, No, there is too much to see.
I love the murmur of the trees
As the wind softly stirs the leaves.
The bees flying to and fro,
Gathering nectar as they go.
The cardinal with his coat of red,
The mockingbird singing overhead.
The robin and the little wren
Are among my many feathered friends.
As through yonder laurel I chance to glance,
A grouse is starting to drum a dance.
The otter from the bank that slides,
The mink who hunts a hole to hide.
The deer that drink in yonder stream
I often see them in my dreams.
And though I may never be worth a dime,
I will always have this love of mine.

On behalf of our Officers and Trustees, I want to wish you a wonderful New Year and I hope your Holidays have been merry.

FOR YOUR CONSIDERATION We ask that you consider CU in your giving.  Your donation may be mailed to CU, PO Box 474, Millville, NJ 08332.

The Officers and Trustees wish you a healthy and happy New Year.