Associate Director Renee Brecht and our volunteers will demonstrate some of the educational learning tools that we have at our disposal for more creatively teaching citizens about the environment. We have selected this presentation simply to have some fun in contrast with the Annual Meeting of the Members.

IMPORTANT CORPORATE BUSINESS New Bylaws. During this year’s Annual Meeting of Members, we’ll be asking for approval of a newly revised set of By-Laws. They reflect changes discussed and prepared by the Trustees and Officers during several workshops held over the past two years. The proposed changes are intended to provide more flexibility and support for the current and future work of CU.

Copies of the draft By-Laws are available for inspection on the Citizens United Web site (http://cumauriceriver.org/pages/propbylaws.pdf ), as well as at the Millville Public Library (at the address noted above). In addition, a copy of the Draft By-Laws may be obtained by submitting a request to Renee Brecht at 856 305-3238 or rbrecht.cumaurice@yahoo.com.

By way of a general summary, here are some of the major features of the proposed By-Laws: 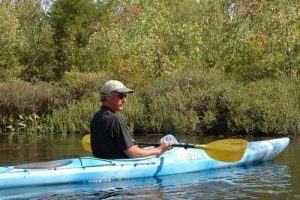 Cumberland Pond BYOB (boat of course)— About twenty people joined Associate Director Renee and Dr. Gerry Moore of Brooklyn Botanic Gardens for this Bring Your Own Boat paddling historical/natural history adventure in Peaslee WMA. We visited the remnants of Cumberland Furnace, which was built in 1785, and then kayaked the pond and upstream toward the associated forge. Lastly, we visited the nearby Methodist Church which is home to a number of bog iron markers likely produced at Cumberland Furnace. Our thanks to Gerry for his botanical expertise!

Educational workshop—Several members attended an educational tools workshop at the Millville Library on September 23. Members were given the opportunity to “try their hand” and use the various environmental tools such as the Enviroscape, microscopes, and much more. These items will be used at festival displays as well as during other educational events. Their purchase was made possible by a grant from Environmental Endowment of New Jersey. 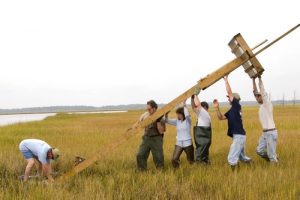 Osprey Nests Erection at Dorchester— On September 28 we had splendid weather for the erection of three osprey poles. One pole was constructed just north of Dorchester Shipyard. Here we hope to lure the bird from the top of a boat’s dredge rack to the pole. The Shipyard staff is cooperating in this effort, intending to place a deterrent on top of the fishing vessel to discourage future nesting. Across the river on a tree-lined dike remnant, ospreys have tried unsuccessfully to build nests in unstable trees. To accommodate this pair of birds we have placed a pole adjacent to the dike. After those tasks were completed we ventured to the Tat Star Farm on the Natural Lands Trust’s Glades preserve near Fortescue. Here we erected a nesting structure that can be seen by visitors at viewing areas. We are grateful to Millville HS teacher Larry Young for introducing two younger volunteers to the project: Harry McCormick and Michael Urgo of Vineland. Also participating that day were veterans Tim Russell, Rob and Donna Dailey, and Jane and Peter Galetto. Natural Lands Trust Refuge Manager/ CU member Brian Johnson met us at the Glades. You may be interested to know that for our volunteers, in addition to needing strength, a little height is most helpful to the process of erecting nests is most helpful. Rob Daily and Brian Johnson clearly raise our mean height- so much so that one might say we think very highly of them. We also sent out an “all call” to our members to help out on the Egg Harbor River recently where River Administrator/CU member Fred Akers needed a hand putting up osprey nests. Member Rob Dailey answered the call and is said to have been a welcome addition to their ranks. Thanks, Rob. 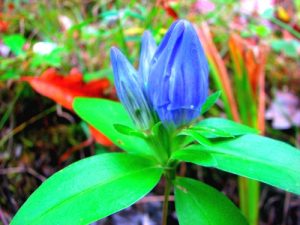 The State Osprey Report has been published for 2008. We are happy to note that the number of state osprey pairs this year finally reached 400. Five hundred pair is the historic target. The state osprey project has clearly made great strides since the effects of pesticide spray had brought osprey numbers to a low of only 50 remaining pairs. CU has clearly been a leader in this project. This year we banded 20% of the 357 birds banded in NJ. In addition to the osprey platforms in which we band chicks, we have constructed an additional 54 structures for other organizations. Based on this year’s productivity of 1.87 chicks per nest we conservatively estimate that we have provided housing for 30 percent of the osprey in the state! Way to go, volunteers!

Fall Campfire— Our thanks to Tim and Mary Ann Russell who hosted our Fall Campfire. Approximately forty-five people attended this event, which was themed “Making a Living on the River.” We heard from several individuals who are familiar with or have made a living on the river, including Rich Weatherby, a local who has many fond memories of growing up on the river; Tom Pew Sr. & Tom Pew Jr., local fishermen; Meghan Wren, Bayshore Discovery Project; Greg Honachefsky, conservation officer; and Cheryl Fox of Al and Sam’s Canoe Rental. Thank you to all of those who donated food and brought their musical instruments! 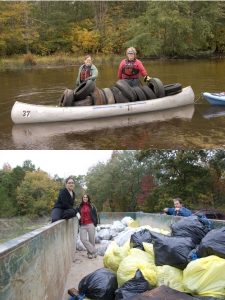 Alliance Beach Clean-up— By the time this newsletter goes out we will have held a clean-up at Alliance Beach in Pittsgrove Township. Alliance Beach, a historically significant area, has unfortunately been subject to dumping of trash over the last few years. Approximately thirty people were expected to turn out to help with the clean-up between Friday October 18th and Saturday October 19th. Al & Sam’s Canoe and Kayak Rental, Pittsgrove Boy Scout Troop, NJ Fish and Wildlife, and Pittsgrove Environmental Commission are all partnering with CU for this project, which is being funded by a Clean Communities grant. Our local conservations officers have promised to keep an eye on this area following the clean-up. 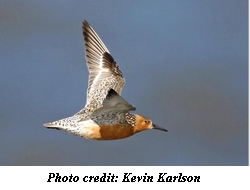 When you get this newsletter we will hope there will have been some positive buzz over the “Ah Why Knot” Recognition Dinner. But for now we can report the planning committee has been working on hosting a fun event. Your committee representatives are Sue Fenili, Irene Bird, Renee Brecht and Jane Galetto. Many, many more folks have already committed to providing goodies for the evening festivities. We shall acknowledge their involvement in our next report. We look forward to celebrating the volunteer accomplishments of Laurie Pettigrew, Greg Honachefsky, Tom McKee, and Larry and Suzy Merighi. Our next newsletter will highlight some of the contributions of our awardees.

Much of our work takes place in our interaction with local and statewide organizations. Over the past few months our board members have interacted in many of these forums making significant contributions. Some of these include but are not limited to NJ Audubon Society, Bayshore Discovery Project, Federation of Sportsmen, the Pinelands Commission, New Jersey Fish and Game Council, Endangered and Nongame Species Advisory Committee, and the South Jersey Bayshore Coalition. A number of our members met the AJ Meerwald as it reminded the citizens of NJ it is NJ’s Tallship by venturing up the Delaware and docking right in Trenton- way to go, Bayshore Discovery Project!

Along with other members of the South Jersey Bayshore Coalition, Renee attended a meeting with Dana Richter, Congressional Staffer, of Congressman LoBiondo’s office to review the concept of the National Heritage Area. The meeting was positive and we continue to move forward in this project.

We are organizing a Congressional briefing in October with the South Jersey Bayshore Coalition in which the main topic will be the Scenic Bayshore Heritage Byway. Congressman LoBiondo is expected to update us on prime topics in Washington DC regarding the environment.

On September 23rd we attended a Cumberland County’s Future Vision focus group on the environment, and on September 15th we participated in the County symposium on global warming and green business opportunities. The County wishes to position itself to take advantage of green business technologies and job opportunities. The Cumberland County Improvement Authority announced their plans at this event to be a self-powered operation at the landfill by using the capture of methane gasses and solar energy. They expect to provide enough power to export an amount of electricity sufficient to service 4000 homes. Way to go, Cumberland County Improvement Authority!

We also provided two charity fundraising tours on the Maurice River. The River Renaissance Center for the Arts was the fortunate recipient of a generous donation from Ron and Jennifer Swift in exchange for a river tour by Jane and Renee. Additionally, Eileen and Bill Hallissey made a splendid donation to the Wheaton Center for the Arts and Eileen took a tour in which CU member Dr. Christine Ward Garrison stood in for Bill. Both days we had wonderful fall weather and a grand time. Thank you Swifts and Halliseys for your generosity to local non profits; CU was happy to assist.

Jane Galetto also spent four days in Boston at a Harvard Business School Centennial Global Business Summit. This event was for business school alumni. Jane was able to participate thanks her husband’s involvement in their business program. The school’s mission statement is: earning a decent living decently. The focus of the talks was on global leadership and its qualities. Some major themes were the crisis in our capitalistic economy, philanthropy, corporate ethics, interdisciplinary problem solving, disparity in income structure/world poverty, global warming, and trusted capable leadership. Jane’s head is still in a spin having been exposed to world business leaders and their perspectives. There were literally 100s who presented, including people like Bill Gates on his foundation, Meg Whitman who pioneered online auctioneer eBAy Inc, famed venture capitalist John Doerr, Jeffery Immelt the chairman of GE, James Dimon CEO of JP Morgan, Sivatsa Krishna responsible for creating Cyberabad in India and Andrea Silbert, president of Eos Foundation.

Jane offers, I was simply overwhelmed by the presenters, their presentations, and the 2000 MBA grads who attended. I was really challenged by the event and felt both charged and humbled. Top businessmen and women were constantly remarking how amazing it was to have such a caliber of people assembled to talk about the future of business. Especially influential were the folks who have selected to make a philanthropic difference. For some the idea of philanthropy in their business and life was a new concept; for others they simply excelled beyond one’s imagination, like Warren Buffet’s gift that has just doubled the capacity of the Gates Foundation. One session I attended was on global warming and the need to invest in green technologies. This was a rather life-changing event for me: to meet Harvard graduates from all over the globe who are entrepreneurs in their various fields of business. Although I certainly haven’t aspired to be a global leader, I hope to be able to use some of what I have learned to better Citizens United to Protect the Maurice River and Its Tributaries.