Continuing with our series on global warming is March’s speaker, Patrick Hossay, Associate Professor of Political Science at Stockton State College. He teaches courses in environmental policy, international relations and development, and is director of research for the New Jersey Cool Cities initiative, a nationwide effort to address global warming through local action. He is also the author of Unsustainable: A Primer in Global Environmentalism and Social Justice. Dr. Hossay will be discussing a chapter out of his newest book, on local solutions to global problems.

Briefs:
The past month and a half has been devoted in a large part to Raptor Recovery Days and the Eagle Festival.  This event is a huge undertaking.  Unsurprisingly CU volunteers were the largest contingency. 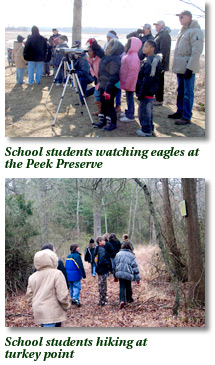 Raptor Recovery Days – Three Raptor Discovery Days this year! Eleven of our members spent one to three days birding and hiking with local elementary school kids (546 of them!) at the Peek Preserve on Wednesday and at Turkey Point on Thursday and Friday.

Some were fortunate enough to see three eagles feasting on a black duck. One class observed a peregrine falcon dining on a dunlin, and yet another class was startled by a barn owl which flew right in front of them! But birds weren’t all that the students saw —Wednesday classes saw flying squirrels, and some Friday classes even saw a marsh river rat scurrying about, hiding underneath their bus! The weather was cold, and even snowy, but for the most part spirits were high and everyone had a lot of fun.

Eagle Festival – Trustee Leslie Ficcaglia once again served as chair of the county festival committee.  Joanne Murphine was table captain and many members rotated hosting the booth; Rob and Donna Dailey, Leslie Ficcaglia, Art Parkin, Gladis McGraw, Pat Sutton, Laurie Pettigrew, Irene Bird, Joanne Murphine and many members who simply pitched in while attending the festival or hobnobbed about.  CU members Roy Kaneshiki and Jackie and Daisey Greenwall-Sandro represented Cumberland County Clay College in helping festival participants make clay wildlife figures.  A number of members represented both NJ Audubon and CU in the field, helping visitors to spot avian species: Diane Jones, Karen Johnson, Janet Crawford, Pam Higginbotham, Sandra Keller, Tony Klock and others.  Around 700 people registered as attendees. Many outdoor visitors and hundreds of volunteers don’t register so we would estimate the overall attendance to be in the neighborhood of 1000.  The weather cooperated with clear sunny skies but make no mistake, it was very brisk.

Chili Dinner and Fundraiser – After a chilly day of birding, our birders flocked to the Chili Dinner.  Over 60 people donated items to the auction or cooked, cleaned, served and organized.  The energy level was brisk and happy.  Our quarters were tight and we may reluctantly investigate new digs.  We grossed over $10,000 at the event and hope to capture in excess of $8,000 toward our programs.  We had four chili bowl winners this year. With so many wonderful contributions, selecting honorees was difficult.  Irene Bird got a bowl for hardest worker – she was on the committee and kitchen detail the past two years. Rick and Lois Abbott got a bowl for the generosity they have shown CU which makes many events possible.  Suzy and Larry Merighi got a chili bowl for organizing the auction items two years in a row.  And Karen Johnson got a bowl for most enthusiastic tour guide (we think that was an impression of a duck being caught by an eagle… whatever – you had to be there).  So it was wonderful camaraderie and a good time to be had by all.

DEP Rejects Use of Dimilin – Citizens United to Protect the Maurice River and Its Tributaries, Inc. played a critical role in the decision of the NJ DEP not to allow the spraying of Dimilin for gypsy moth control.  Our primary issues echoed member Dale Schweitzer’s (Ph.D.) expert testimony on the subject.  The ability of Dimilin to kill almost all leaf eaters for an entire season was of great concern as it impacted the welfare of invertebrates.  Since l985, the  Department of Agriculture and the NJDEP have used ONLY Bt, a biological pesticide with no known mammalian toxicity, as the pesticide of choice for the gypsy moth suppression aerial spray program in municipalities and in state parks and forests.  In fact, Department of Agriculture’s regulations explicitly state that DOA “select the most efficacious non-chemical insecticide (Bacillus thuringiensis)”.  DEP’s own pesticide regulations ban aerial spraying of broad spectrum pesticides for non-agricultural purposes. We are very thankful that this policy is being upheld.

Officers and Trustees Support Open Space – CU continues to participate in the Outdoor Recreation Alliance supporting the continuance of the Garden State Preservation Trust.  As such we distributed a letter of support to local papers. The GSPT has been the funding vehicle for open space acquisition through programs like Green Acres and Farmland Preservation.  It is anticipated that this year the Trust’s cupboard will be out of the green stuff—dollars that is!  The citizens of NJ must act now or we will be unable to create any new recreational areas or preserve natural and historic areas.  The full text of our letter can be found on our website under You Can Make a Difference.

Planning Workshops – The trustees and officers are continuing their workshops planning the path for CU’s future.  We have been discussing long-term goals and job descriptions for staff and volunteers alike.

The South Jersey Bayshore Coalition (SJBC), of which CU is a member, met on January 19th. Currently the Rutgers Center for Remote Sensing and Spatial Analysis is working on a digital map for SJBC that will collect, compile, and synthesize the existing mapped, relevant cultural and environmental resources in the South Jersey bayshore area. The project is nearly completed.

Water Allocation Workshop – On January 25, CU representatives attended a water allocation workshop hosted by the Association of New Jersey Environmental Commissions. Southern New Jersey waters are replenished but are in finite supply. We learned how to track water allocation applications and each status in the DEP’s database.  Additionally the process by which to request a hearing was reviewed.

Presentation – On February 12, 2007 a very enthusiastic Garden Club of Stone Harbor enjoyed CU’s presentation Eggs to Flight.  Nearly 80 people were in attendance; many were very inquisitive.

We had our first New Members’ Orientation on February 18, 2007.  The purpose of this event was to let new members know more about us and allow us to know more about their interests, essentially allowing each to participate at his or her own comfort level.  Due to the kindness of members Laura and Bob Johnson we were able to enjoy soup and sandwiches at their home and take in the wonderful views of the river.

Bear Swamp Hike – on Sunday, February 25, CU sponsored a joint trip with Natural Lands Trust to Bear Swamp West in Cumberland County. Steve Eisenhauer of CU & NLT led this trip.  About 35 people participated. The snowy day added to the scenic view. Bear Swamp West, which is owned by Natural Lands Trust, contains some of the last remaining old growth forests in the Mid-Atlantic region. Some of these trees–mostly sour gum, sweet gum, and tulip poplar–are estimated to be more than 400 years old. Protection of the forest has evolved over the past 25 years. A second trip is in the works.

Volunteer Wanted: to clip CU related articles from the AC Press, the Daily Journal, and the Cumberland Reminder for an archive. Ideally, this should be someone with access to a copy machine.

RD Wood School will construct two larger boats as a departure from the Bevin Skiffs that were built the past two years. Principal and CU Member Bill Sheridan tells us the boats will be donated to the Bayshore Discovery Project upon completion to be used in its educational programs.  If you are interested in helping out please contact Gladis McGraw at 856-293-2245 during the school day.

On Saturday, March 17 we are planning an osprey repair day, depending on availability of boats and weather conditions.  Call Jane for information on March 15.  Prior to that she will be unavailable.

April 28, Thursday Maurice River Recollections Campfire at Parvin State Park. October’s campfire at the Burcham farm had over 60 attendees, and we anticipate another fun-filled evening at Parvin’s. It’s BYOW&I—Bring your own wieners and instruments. We’ll supply the hot cocoa, rolls & condiments, and baked goods.

May 12, Saturday Eco-Fair at Wheaton Arts: Green Living for Your Home and Garden. We are looking for volunteers to man the CU booth.

The World Series of Birding is just around the corner on Saturday May 12, 2007. For many years Citizens United to Protect the Maurice River and Its Tributaries, Inc. has had members participate in the event raising dollars for other charitable organizations.   This year, a team of our birding members (led by enthusiastic Captain Diane Jones) decided to raise dollars for CU.  Our team’s name is CU Birding Cumberland County and our mascot is the osprey, thus the team members’ moniker is the “Fish Hawks.”  Our world-class birding team is well into planning for this event and will set the bar high for all future teams.

Of course we need our members to participate by being donors.  Here is how you can support the Fish Hawks.  Select an amount of money that you wish to sponsor per bird species — 25¢, 50¢, 75¢, $1. You might prefer to give a set sum toward cheering on your team.  If the weather is cooperative they would likely see 125-150 species! All the profits go toward Citizens United to Protect the Maurice River and Its Tributaries, Inc.’s mission.

All the “Fish Hawks” were present at the Chili Dinner, so we hope you had a chance to meet them.  They are Diane Jones, Karen Johnson, Janet Crawford, Clay Sutton, Pam Higginbotham and Katharine Patterson.  Enclosed is a pledge form.

Steve Eisenhauer, of Natural Lands Trust, has generously offered our membership the opportunity to attend a number of canoe and kayak trips at no charge throughout this year. Please see the calendar below for more information. Our thanks to NLT for this opportunity, as well as the Bear Swamp hike. Registration is limited to first come, first serve.

Marie Amick Ball: 1925 – December 2006 – As many of you have probably noticed our mailings come out of Christiansburg, VA.  This is because Doreen Homan, one-time Vineland resident, has handled our mailing services for over 20 years. Doreen has worked at various mailing services before becoming an independent mailer.  Through those changes Doreen has always managed our account.  Her mother, Marie Amick Ball, came from West Virginia and live with Doreen for a number of years. During that time she stuffed and stamped many CU letters.  When Doreen’s mother’s health deteriorated they moved to Virginia so other family members could enjoy their mother’s final years and pitch in to help with her needs.  Even in illness, Doreen relayed that our mailings gave her mom a sense of purpose.  Sadly, just as our annual message was distributed Doreen reported her mother’s passing to us. My memories will be of the kindly cherub-like Marie quietly assisting Doreen in her work. Marie also loved attending Doreen and Carl’s friend and family functions.  Our thoughts go out to Doreen and her family and we hope that their wonderful memories will keep Marie’s spirit alive.

Bring all ingredients to room temperature.  Combine all ingredients in a large bowl and beat with a mixer at medium speed for 4 minutes.  Pour into a 12 cup (10 inch) tube pan that has been buttered and floured on the bottom and up the sides.

Bake at 325 degrees F for 60-70 minutes or until the top springs back when touched lightly in the center.

Cool the cake upright in the pan, then run a knife around all edges and unmold onto a serving plate.  Sprinkle with powdered sugar.