Protection of Our Resources

Delaware River is the second largest oil port in the United States, which necessitates a high level of oil spill preparedness. Rob Schrader will share slides from the Delaware Bay region taken during recent incidents, illustrating NJDEP and the US Coast Guard’s actions to protect the estuaries. Schrader has 20 years of emergency response experience: 12 years with the USCG and he presently works at NJDEP. He helps to develop coastline protection projects with the US Coast Guard, NOAA, Delaware Bay, River and Clean Harbors Cooperative as well as other private agencies. He has authored and documented oil boom plans and oil spill clean-up strategies for the Delaware River and Bay. He is the co-author of Tidal Inlet Protection Strategies for Coastal NJ. This publication, presented at the International Oil Conference, addresses a range of tactical responses necessary at the inlets from various perspectives: geomorphology, aquatic life and endangered species. Additionally, Rob has worked with Federal Trustees when they jointly formulated and completed a project installing osprey-nesting boxes on boom anchor pilings, the boxes having been constructed by CU. This dual protection concept is now a nationally accepted protocol and is the subject of published articles and presentations at venues such as the International Tri-State Bird and Rescue Convention.

Schrader currently holds a position as the State’s representative to the Sensitive Area and Operations Sub-Committees (OSC) for the US Coast Guard Port Area Committee in Philadelphia. He is responsible for the identification and protection of all sensitive areas along the Atlantic Coast and the Delaware River and Bay. Since 1986, he has served as OSC on numerous medium and large oil spills along the Atlantic Coast and Delaware River and Bay.

LAND AND SEA VOLUNTEER DINNER – Save the date! Saturday, October 21, 2006. Join us at the Union Lake Sailing Club as we celebrate our volunteers with a Land and Sea Volunteer Dinner. If you are interested in serving on our Volunteer Dinner Committee please contact Renee at 856-305-3238 or rbrecht.cumaurice@yahoo.com

RIVER FESTIVAL – Citizens United will be participating in Millville’s Annual RiverFest on July 8th. We will have a display and will also be offering our popular CU Paint-a-Landscape activity. We are looking for volunteers to man the table and to help with the CU Paint-a-Landscape activity. Please contact Renee at 856-305-3238 or rbrecht.cumaurice@yahoo.com Other festival sponsored activities include a Canoe and Kayak Regatta and a Paddle Fishing Tournament.

CUMBERLAND COUNTY 4-H FAIR – Citizens United will have a table exhibit at this year’s Cumberland County 4-H Fair from July 3 through July 7th. Be sure to stop by and see us!

WALL OF FAME – Congratulations are in order! Members Suzanne Merighi and Bill Sheridan were honored by RD Wood School on their Wall of Fame. The wall is adorned with plaques and photos of graduates who have made a difference in their communities. Suzanne is very active as Millville Public Library’s Reference Librarian and as a member of Cumberland County’s

Cultural and Heritage Commission. Yes, Bill is the Principal of RD Wood School and was honored… this was a staff surprise for all the work he has done that goes far beyond his job description toward the betterment of the local community. Especially noteworthy is that the Millville Chamber of Commerce also selected Bill as the Citizen of the Year 2006.

CONNIE JOST MEMORIAL SCHOLARSHIP WINNER – This year Kaye Waltman of Millville Senior HS has been selected as the recipient of the Jost Scholarship. Not only is Kaye an accomplished potter but she is also a fine student, having just graduated in the top 2% of her HS class. Congratulations Kaye!

OSPREY – Thus far it has been an exceptional year for osprey. CU platforms have a record of 94 eggs. This does not count numerous natural nests or those located on inaccessible utility poles. This is the first year we have officially recorded nesting at Willow Grove Lake, although rumor has it that they nested there last year as well. On June 10 we constructed five platforms and hoisted four of them at various points along the Maurice River. In less than 10 minutes one pesky pair had laid stake at their new digs. This pair was a major impetus for our work party. They had been trying to place their nest on top of a cluster of purple martin gourds. When they weren’t busy annoying the martins they were trying to get other osprey to consider abandoning their platforms. Due to all the commotion long-time osprey coordinator Eddie DiPalma has aptly named this nest “Chaos.” As of June 17 we began banding the oldest chicks. The Villani family was taken out for an osprey banding experience that also raised funds for Woodland Country Day School. Their two young sons reportedly had a great time.

DOWN JERSEY WORKSHOP – Over one dozen teachers gathered on June 2, 2006 for a Down Jersey Teachers’ Workshop, presented by Christine Raabe. Over four hundred local teachers have enjoyed CU’s award winning curriculum as presented in daylong sessions. The workshop offers professional development credits, and each school receives a curriculum kit. Irene Bird and Renee prepared lunch for all, and Donna Pio and Libby Rothfarb led us on a lunchtime tour of the River Renaissance Center for the Art and the local Glasstown district. We were also fortunate to be treated to a clay demonstration by local potter Jackie Greenwald-Sandro.

BAY DAYS – This year’s 14th Annual Bay Days was dedicated to CU. Once again our volunteers were out in full force. Trustees Ethan Aronoff and Joanne Murphine and Assistant Director Renee Scagnelli were present for the dedication on Saturday afternoon. Tricia Dufford, Kaye Waltman, and Ron Swift led the CU Paint-a-Landscape. Ed Pio, Jennifer Swift, Irene Bird, Joanne Murphine, and Ethan Aronoff covered the hospitality at the table display. Bill Sheridan assisted festival participants in a boat building experience, and Renee led interpretive river tours. Many other CU members volunteered to a wide array of organizations that were represented at Bay Days. Thank you to all of our volunteers for your participation!

DEVELOPMENT PROPOSALS – In the last newsletter we reported that the Millville Planning Board was reviewing two projects at their May 8th meeting. The board ultimately sent the proposal for Union Lake back to the drawing board. The members of the board shared CU’s position that the project was not truly a cluster development.

The Hanson Aggregates proposal to mine sand at the “Triangle” was approved by the board. A number of the concerns that we raised and made suggestions about were referenced in the Board’s resolution.

CU INTERN – Ryan Dailey continues to excel academically as well as in his musical and acting abilities. He recently stared as Pippin in Millville HS’s musical production of the same name.

DONATIONS – The response by the first half of the year donors has been extremely generous. People continue to raise their level of giving. As we proceed to include hired staff in the organization this response has been most encouraging.

WORLD SERIES OF BIRDING – This May a number of our members participated in the NJ Audubon Society-coordinated World Series of Birding. This event raises money for numerous causes with an emphasis on conservation. At the same time the day heightens the individual’s consciousness about the wide array of birds for which we are the stewards here in NJ. It consists of teams seeing how many different species of birds they can record in the same 24 hour period. Each species identified earns a donation of so much per bird. In 2007 we hope to use this event as a CU fundraiser. Some of our more skilled birders are putting together their collective skills to develop a five-member team. We need some corporate sponsors and some donors’ pledges per species identified.

REPORTING VIOLATIONS – Our members continue to be concerned about stream encroachment violations and illegal discharges. Recently, a suspected violation was reported to NJ DEP Compliance and Enforcement regarding a tributary of the Menantico. We compliment our members on their continued vigilance and concern.

OUTDOOR RECREATION ALLIANCE – A coalition of environmental and sportsmen’s groups, affordable housing advocates and environmental justice activists have joined forces to urge the Governor and Legislature to support a constitutional amendment to create a stable source of funding for maintenance and repairs of state and local parks and natural areas. NJ’s city, county and state parks are chronically underfunded despite their critical importance to our state’s economy, environment, public health, and quality of life. Decades of inadequate funding have resulted in a steady decline in services and maintenance, including a $250 million backlog in repairs, fewer conservation officers, closures of park facilities and lost educational opportunities. Thus far the coalition has had a lobby day in Trenton and legislative committees have already taken the first steps toward this campaign’s goal becoming a reality. CU has joined this coalition. 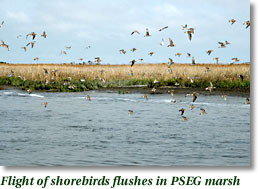 SHOREBIRD HORSESHOE CRAB SPECTACLE – Not only does the annual migration of horseshoe crabs bring the annual migration of shorebirds to the Delaware Bayshore beaches but it also brings out the birdwatchers and scientists. Researchers come from around the globe to study this phenomenon. This year, as in years past, the group was treated to an annual feast of wild game supplied by our members. The 2006 conservation efforts were marked by NJ DEP Commissioner Lisa Jackson leading the charge to protect the shorebirds. A special thanks must also go to the NJ Marine Fisheries Council for agreeing to close the harvest in NJ. A number of our members volunteered for the banding efforts.

PSEG RESTORATION TOUR – CU President Jane Morton Galetto continues to serve on the Estuary Enhancement Program Advisory Committee (EEPAC). On May 31 the Committee made a visual inspection of the Commercial Township marsh restoration. This 4,171 acre site has made great progress toward becoming the type of habitat which promotes the production of local fish species. The goal is to take a degraded marsh characterized by an abundance of salt hay and invasive phragmites and revegetate the area to a more complex assemblage of desirable native vegetation that supports juvenile fish.

COMMUNITY FOUNDATION – CU President Jane Morton Galetto met with founders of a local community foundation to discuss the ways in which the foundation can take locally donated revenue and seek matching funding from other larger foundations.