Presentation by
The Association of NJ Environmental Commissions

As many of our members are aware, ANJEC is a statewide non-profit organization that assists the efforts of environmental commissions, local officials, interested citizens, private organizations and government agencies. Their mission is to promote the public interest in natural resource protection, reclamation and sustainable development and to support environmental commissions working with community officials and concerned citizens. In our region they also work to protect the special resources of the Pinelands and the Delaware Bayshore.

The presentation will focus on smart growth and addressing myths regarding the ratable chase and the cost of open space preservation. 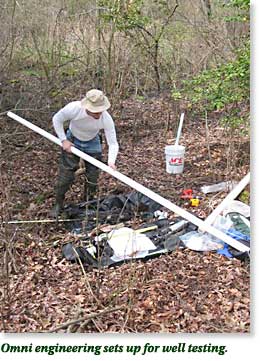 The Parvin Branch water quality assessment project in Vineland is out of the starting gate! After almost 3 years of negotiation delays with the state, NJDEP has finally approved the Quality Controls for the work plan, and the actual collection and analysis of water samples has begun. Two shallow test wells were installed and the first groundwater samples were collected this May. Stream water samples from three locations will be collected once a month for a one-year period, and macroinvertebrate sampling was conducted once in early June and will again be done at the end of August. The cloudy orange water is still flowing steadily every day from Parvins Branch into the Maurice River, and hopefully our assessment project will solve this water quality mystery. To date Citizens United has matched the $56,450 federal/state grant for this project with $33,441 of in-kind services and contributions. This is primarily due to the endless endeavors of CU water quality manager Fred Akers. A special thanks also needs to go to our consultant Omni for waiting out and assisting to overcome delays.

A cold spring has negatively affected ospreys and we expect a large number of nest failures resulting in low productivity. Some of the most reliable nests have already failed. We will began banding the last week of June and will band late arrivals much of July.

The Annual Baydays proved to be a lot of fun. Saturday’s volunteers unfortunately had to contend with gnats galore, so much so that the creatures made headlines in some of the papers. But Sunday proved to be splendid. The boat rides and landscape painting were well attended. Many volunteers participated – a special thanks to Joanne Murphine for organizing our ranks. Those who helped out were Mary Lou Barbose, Ethan Aronoff, Tricia Dufford, Ron Swift, Jennifer Lookabaugh, Tricia Dufford, Ed Pio, Renee, Joseph and Kristen Scagnelli, and Jane and Ashley Galetto.

Cumberland County and the local conservation organizations have already begun to plan next year’s Raptor Festival – whoops make that Annual Eagle Festival. The committee has decided to go with the more recognizable star performer as the headliner. The education days will be brought back into the venue through the coordination of NJ Audubon Society’s Nature Center of Cape May. Members Leslie Ficcaglia (who serves as chair), Steve Eisenhauer, Renee Scagnelli and Jane Galetto are all part of the planning team.

We continue to participate in the PSEG Estuary Enhancement Program Advisory Committee. This June there have been two tours and an Advisory Coommittee meeting. PSEG updated the group on their progress to date to restore spartina alternaflora and other desirable vegetation to the marsh plain. The Cohansey, Dennis and Maurice River Twp. sites have reached the vegetative success criterion as defined by the DEP. Alloway Creek is approaching this goal. Commercial Township had drainage problems that have been improved, and it is now on a trajectory to success. The real test is whether these vegetative results can be maintained with minimal or no herbicide usage. The monitoring of fish reproduction in the restored areas was also reviewed, and a report on various sound and bubble techniques to keep fish from being affected by the nuclear plant’s intakes was presented. These techniques are being tested on a smaller scale than actual implementation. Each of the Bayshore restoration sites is reviewed for the percentage of the marsh plain that has met the restoration goals.

Our members continue to participate in the South Jersey Bayshore Coalition; the lead organization, ANJEC, organized a workshop on issues of open space protection and its costs. Some of the topics discussed in that forum will be presented at the meeting Wednesday July 13.

A number of our members participated in banding shorebirds with the NJ Division of Fish and Wildlife’s Endangered and Nongame Species Program. The Program’s scientists report that the redknot (a species of shorebird) is in dire straits. Populations on their present trajectory are indicative of extinction by as early as the year 2010. Biologists work feverishly to avert a total crash of this species. Measures were taken to extend the season closure on horseshoe crab harvest until all the redknots had migrated out of the bayshore region, since they are reliant on crabs’ eggs produced during harvest. Many conservation groups are seeking to have the redknot listed as a Federally protected species. The banding of the birds gives the biologists critical knowledge/ insight into the bird’s caloric needs, travel times, productivity, forage sites, age, and much more.

Yes, it was a great race on a great River. As you know, CU members and other community volunteers have been constructing Bevin rowing skiffs at Wood School. Citizens United made it possible for three of the “kits” to be purchased. One skiff paid for by our members, one was purchased by a family foundation we approached, and the third was made possible because a discount was included for working with a local environmental group.

June 15 the six boats had a race in the Maurice River. There was a large turn out for the event. I don’t think any of the young students had rowed a boat before the competition. There is reason to be concerned that there might be a few cases of poison ivy for those who went astray. It took a rescue boat, two kayaks, and a lot of time to get all the boats on the starting line. There was a lot of directional confusion about how a boat should be rowed: forward, backward and yes, some tried sideways. From the spectators there were lots of instructions, laughter and pride. From the participants there were a lot of directions, laughter and, well … some arguing. But guess what! By the end of the event there was a great deal of improvement and the pride in making a “real” boat – wow! Everyone was just so pleased. The first bit of good news is that no one was injured and no one capsized. The second bit of good news is – drum roll please – the CU boat took first place! It was skippered by Ryan Dailey and paddled by Michael Ross and Michael Mitkos. The main participants in constructing the CU craft were Advisors Peter & Jane Galetto, Bill Sheridan, Irene Bird, and Rob & Donna Dailey. The students were Michael Ross, Michael Mitkos, Hosea Gonzalez, Marshall Crump and Ryan Dailey. CU participants on other boats were Ashley Galetto, Gladis and Greg McGraw. Hopefully we didn’t miss any other members.

The new date for the NJN/ CU documentary movie premiere of Reflections of a Bayshore Artist: Glenn Rudderow is Friday, November 4, 2005 at Cumberland County College, Frank Guaracini Jr. Fine & Performing Arts Center/ George P. Luciano Sr. Theater. It should be a super turn out so mark your calendars and get your reservations in as soon as you get your invitations.

New Jersey Canoe and Kayak Trips 2005
Explore the waterways of Southern New Jersey! The ever-popular South Jersey Canoe Trips are back, conducted in partnership with Citizens United to Save the Maurice River. This year we are also offering kayak trips, thanks to grants from the Geraldine R. Dodge Foundation and the National Parks Service. New Jersey Natural Lands Trust Manager and CU Trustee Steve Eisenhauer will lead the trips, sharing natural science and human history while introducing you to the public waterways of this area. Trip dates and locations are listed below. Sign up early as space is limited. You will be sent directions upon registration.