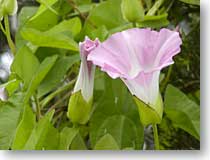 Renee Scagnelli takes an interest in South Jersey flora. She is a US Fish and Wildlife’s Adopt a Swamp Pink Population Volunteer and conducts swamp pink counts. Her stewardship efforts have run the gamut of participating in clean-ups and in a preserve bioblitz, preparing database reports on species, leading field trips, and working for NJ Natural Lands Trust as a preserve monitor reporting rare species data. In the past two years Renee and her daughter have reported several previously unknown populations of rare plant species. One flora discovery resulted from difficulty identifying a plant as a more common relative; in fact it turned out to be a state historic plant.

Along with CU members Fred Akers, Steve Eisenhauer, and Tony Ficcaglia she has been taking a Pinelands Preservation Alliance course in rare flora of the Pinelands. She is registered for Rutgers Wetlands Delineation courses and is also a student at Atlantic Cape Community College. Renee’s goal is to become a field botanist with an emphasis on conservation of our rare species and their habitats.

She is a volunteer for CU, The Nature Conservancy, Partnerships for NJ Plant Conservation, and an active member of the Philadelphia Botanical Club.

Reprint of Down Jersey – Celebrating Our Sense of Place – Our teachers’ curriculum is hot off the presses. A special thank you for the assistance of the National Park Service and the Cumberland County Improvement Authority.

Research Journalist – Debbie Barsotti is embarking on a number of articles to be submitted by Citizens United for publication in the Cumberland Reminder. These articles will give readers insight into the folk heritage of the river. They will offer snippets of the narratives that local river residents and users share. Debbie’s style has already proved engaging to readers who have mentioned enjoying the first article about the study. The newspaper articles are a commitment beyond the existing contract with Debbie, and we hope that our membership will look for them in the Cumberland Reminder. We will retain ownership of the articles to post to our website after they have run in the paper. 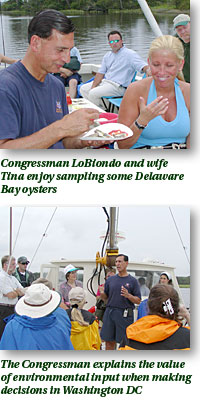 Conservation / Congressional Tour – on August 13, 2004 Citizens United to Protect the Maurice River and Its Tributaries, Inc. coordinated a mini-summit on the river so that Congressman LoBiondo could get an update on conservation activites in his district and also slurp a few oysters. Representatives were in attendance from the Congressional Staff, NJ Audubon Society, Great Egg Harbor Watershed Assoc., The Natural Lands Trust, New Jersey Conservation Foundation, Delaware Bay Schooner Project, NJ Division of Fish and Wildlife, Sierra Club, Meadowlands Conservation Trust, The Nature Conservancy, William J. Hughes Technical Center, and the National Park Service. Valuable information was exchanged and although hurricane squalls were forecast, the weather cooperated and everyone had a marvelous time.

Purple Martin Festival and East Point Open House – These events were well attended and folks enjoyed themselves. You might notice a new face at our display table. Ryan Dailey is a high school student working toward his congressional medals for public service. He is earning his hours doing conservation work for CU. Don’t let his TALL physique fool you; he is just a high school freshman. He has assisted with assembling our teachers’ kits and wants to do some field work for The Nature Conservancy as well. Welcome aboard, Ryan.

This season we banded 56 ospreys. Prior to this year our record was 60 chicks in 2002 and last year we had numerous failures due to weather and only banded 33. Unlike our banner year we did not band on two electrical platforms; had we banded young at the electrical stanchions we would likely have tied the record. We are also continuing to see natural nesting sites. So a hearty congratulations to our volunteers for having prepared the platforms for a productive year! We wish our osprey safe flights to South America.

He granted the conservation groups their motion to vacate and declare null and void the Millville Planning Bd.’s approval of Millville 1350’s General Development Plan application to develop the Holly Farm/Conectiv property. Judge Fisher characterized his decision as based on the City’s engineering and planning experts’ advice that the application be deemed incomplete.

On August 16 the applicant reapplied for review of their General Development Plan. We are very pleased that we were able to have a number of experts testify regarding the impacts and deficiencies of this project. We urge our membership to make their concerns known at the September 15 meeting of the board, when the application will be continued.

Presently, we are still awaiting the administrative action by the Board of Public Utilities determining whether the owner of the Holly Farm, Conectiv, can transfer the property to developer Millville 1350, LLC.

We continue to believe that the Green Acres offer to purchase and preserve the property is in the best interest of the citizens of NJ and hope that the BPU will share this position.

Motorsports Ordinance in Millville – Citizens United and the Association of NJ Environmental Commissions reviewed this ordinance. We found significant deficiencies in the makeup of buffers (it allows unsurfaced roadways to be included and doesn’t protect wildlife), lack of noise regulations (none exist for the oval track), no definition of what constitutes night hours, open space includes landscaping and pervious parking areas, and there is no mention that buffers must be designed to lessen noise, to mention only the most serious.

How About Your Own Expedition? Sign up for a Citizens United 2004 Canoe/Seining Event – Trustee Steve Eisenhauer will be running a number of canoe trips this year; the schedule is below. These trips are informative and enjoyable so don’t miss out! A modest donation may be requested for these trips. All events start at noon. If you plan to attend please call 447-3425 by 5 PM on the preceding Thursday. Also if you need to cancel after reserving be sure to call ASAP because there is usually a waiting list. Steve has reported that not only are the trips enjoyable but they have also been full. Enjoy.

September 25: Meet at NLT’s Peek Preserve on rte. 47 across from Lilac Avenue for a paddle of the tidal Maurice River
October 30: Meet at the floating dock below Union Lake dam in Millville on the Maurice River