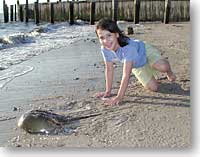 Moonlit nights trigger thousands of horseshoe crabs to emerge on the Delaware Bayshores. The billions of eggs these crabs leave behind are devoured by millions of shorebirds en route to their arctic breeding grounds. Come enjoy The Nature Conservancy’s Brent Burke for a behind-the-scenes look at an ancient and imperiled relationship, while learning how TNC’s Delaware Bayshores Program is protecting this globally rare phenomenon.

Brent Burke is the Community Outreach and Volunteer Program Coordinator for The Nature Conservancy Delaware Bayshores Program in Eldora. He has worked in the field of environmental interpretation for nearly ten years, conducting natural science talks, leading field trips and kayak tours with Ocean County Parks and Recreation and with NJ State Parks at Island Beach, and as a freelance naturalist.

With the shorebird migration upon us you won’t want to miss out on this program!

Osprey Ready! On March 21 and April 4 Citizens United volunteers kicked into high gear, braved the weather, and got some wet work done. Three new platforms have been put up, one was straightened after ice damage, and numerous predator guards have been replaced. Who were these hearty souls who braved the elements? Members Irene Bird, Eddie DiPalma, Peter, Jane and Amanda Galetto, David Lowenstern, Tony Ficcaglia, Kenny Pacitto, Leslie Hurley, Suzy and Larry Merighi, and Gladis McGraw all helped out. Richard and Harriet Andrus not only asked if we would place a platform on their property by the Mauricetown Bridge but also assisted on both days! You can be sure that on April 4 the white caps, snow and chill factor were beyond the call of duty. Tony remarked that he had seen some folks dedicated enough to be fishing despite the weather that day. His spouse Leslie found his observation comical in that at least they were sitting in boats; after all, we had been waist-deep in the water all morning!

7th Connie Jost Memorial Art Scholar Selected – Once again a panel of professional artists has selected the recipient of the esteemed art scholarship. Jacquelyn Hair, senior at Millville HS, has been chosen for this honor. She is accomplished in many art forms: fine art, theater, textiles and literature. This award is a testament to her, her instructors, and her family’s contributions to her fine character. Many of you may know Jacquie as the weekend shop manager at the Riverfront Renaissance Center for the Arts or as a lead actress in local productions. She was also the first Millville HS student to be accepted into the Governor’s School for the Arts. She has been accepted and plans to attend The University of the Arts in Philadelphia. Congratulations, Jacquelyn! 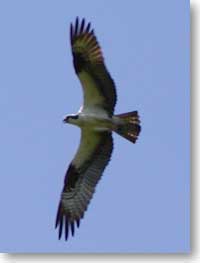 Eggs to Flight Power Point Show Takes Off – There have been lots of requests to present CU’s new show that documents the maturation process of osprey during their first 10 weeks of life. The Great Egg Harbor Watershed Association and Stone Harbor’s Wetland Institute were enthusiastic audiences recently. The upcoming NJ Audubon Society’s Spring Weekend will also feature a presentation of the osprey show.

Holly Farm Conectiv Tract – Rutgers Environmental Law Clinic continues to represent us in advocating the preservation of the entire forest which includes the Holly Farm. The Board of Public Utilities has granted the conservation community intervention status in the process by which they will determine if Conectiv is able to sell the property for development. The significance of the decision is that the BPU has determined that we have a legitimate interest in the outcome of the case/property. We are also challenging the Millville Planning Board’s approval of Developer Millville 1350’s general development plan. 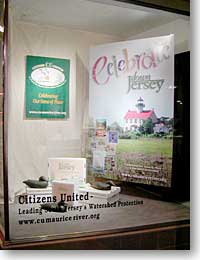 Window Display at Riverfront Renaissance Center for the Arts (RRCA) – The RRCA was kind enough to allow us to place a display in their window for nearly two months! This was the second year in a row that we were invited to use this space. Unfortunately, there has been no lighting in the gallery’s window since they opened nearly three years ago. Through the kindness of a CU member/electrician, a special Wild and Scenic Rivers Partnership Grant to increase our website visitation, and the CU coffers we were able to arrange for permanent lighting for that area. Our members also offered their expertise in providing the items for display. The huge copy of our poster (also made possible by a professional membership donation), featuring elements of our teachers’ curriculum, makes a great splash in the window. Naturally, CU’s website address is prominently displayed as well, and will hopefully encourage teachers to share lesson plans about our region.

Citizens United 2004 Canoe/Seining Events
Trustee Steve Eisenhauer will be running a number of canoe trips this year; the schedule is below. These trips are informative and enjoyable so don’t miss out!

All events start at noon. A modest donation may be requested. If you plan to attend please call 447-3425 by 5 PM on the preceding Thursday. Also if you need to cancel after reserving be sure to call ASAP because there is usually a waiting list.