Annual Meeting
The annual meeting will select officers and trustees for the coming year.

Parvin & Tarklin Stream Project
As you may recall from our last newsletter, Citizens United to Protect the Maurice River and its Tributaries has recently received approval for a $56,450 Assessment, Monitoring and Environmental Education Grant for the Parvin and Tarkiln Branches in Vineland. Fred Akers and Dr. Tim Jacobsen are project managers. Fred reports that he has supervised the first clean-up on these streams. The Cumberland County Improvement Authority was kind enough to provide mesh bags and hauling for the trash. 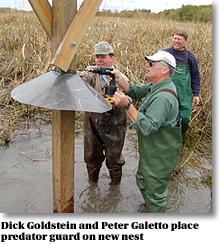 County Birding Guide
Leslie Ficcaglia reports that the second edition of the guide is one step closer to being published. Ornithologist Clay Sutton has made the written revisions and designer Donna Vertolli is working on implementing the newly approved layout. It is expected to be ready for the County’s Raptor Festival, and should make quite a splash! A special thanks to the Geraldine R. Dodge Foundation for helping us free up operating expenses so we could embark on the guide.

Osprey Work Party
On October 20th a small group of volunteers hoisted a new osprey platform and replaced atop on an existing pole. A special thank you to all those that showed up to help out. We are looking forward to a productive spring.

Menantico and Manumuskin Residents
We have ordered “NO WAKE RIVER” signs for these two tributaries. These signs will be available to be placed on property owners’ docks. If you are interested please call us at 856-327-1670. As per the recommendation of the Wild and Scenic River Comprehensive Management Plan we also intend to place “Electric Motor Only” signs for craft upstream of Route 55 on the Menantico and upstream of the railroad tracks on the Manumuskin.

Open Space Forum
On September 23, 2002 Citizens United hosted a forum of conservation groups and advocates so that the Open Space Institute and Geraldine R. Dodge Foundation could begin a dialogue on land preservation with them. OSI and GDF have created the New Jersey Conservation Loan Program and will offer $2.5 million in bridge loans to land trusts for open space preservation. Our president Jane Morton Galetto will serve on the Advisory Committee for this program. She notes, “I am very excited to help enable land trusts to act swiftly to protect our State’s treasures.”

Governor’s Smart Growth Summit
A select group of conservation leaders and business representatives attended a Governor’s Summit at the College of New Jersey on October 22, 2002. In an effort to make good on Governor McGreevy’s commitment to endorse smart growth vs. sprawl he announced an executive order to made it a top priority of his Cabinet. Each of the Cabinet members then unveiled their respective Departments’ plans to give incentives to communities for redevelopment of cities and preservation of open space. President Galetto was in attendance for this monumental announcement.